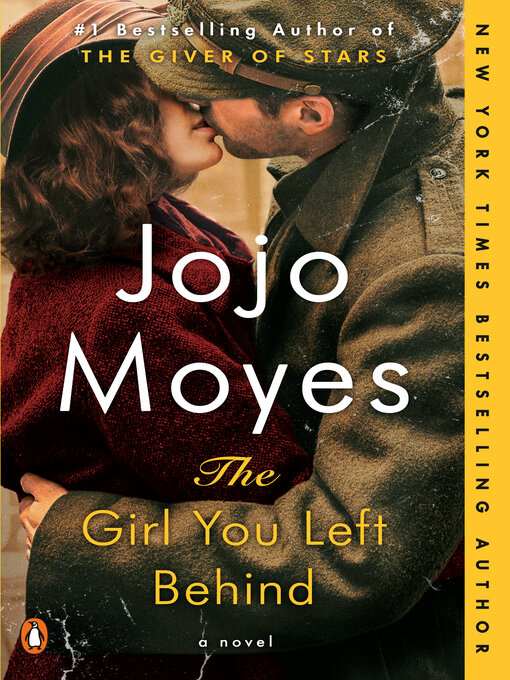 The Girl You Left Behind

From the author of Me Before You , Still Me , and The Peacock Emporium , a sweeping bestseller of love and loss, deftly weaving two journeys from World War I France to present day London. Paris, World War I. Sophie Lefegravre must keep her family safe while her adored husband, Edouard, fights at the front. When their town falls to the Germans, Sophie is forced to serve them every evening at her hotel. From the moment the new Kommandant sets eyes on Sophie's portrait painted by her artist husband dangerous obsession is born. Almost a century later in London, Sophie's portrait hangs in the home of Liv Halston, a wedding gift from her young husband before his sudden death. After a chance encounter reveals the portrait's true worth, a battle begins over its troubled history and Liv's world is turned upside all over again.
Publisher: 2013
ISBN: 9781101638163
Characteristics: 1 online resource

A wonderful love story - actually two: early one in WWI, later in 2006 (approximately). Recommended by Patricia.

I am ambivalent about this book. In the beginning I felt I liked it and then I wondered where it was going. When it came to the present I was thoroughly confused. Finally when the past and present were tied together I got engrossed in the book. I'm not sure I'd have behaved like Liv but well she's Moyes's character and it's the authors prerogative to create a character in any mold she chooses. The tale has enough twists and turns to keep the reader engrossed but I'll have to say this is not one of JoJo Moyes's better works.

This was just 'ok' for me. Not my typical genre, but definitely a good story. I enjoy Moyes novels nonetheless.

This is a different Moyes than I'm used to but still a great and entertaining read with a serious topic to explore and great narrators to tackle it.

Really good story. I find these books hard to put down, easy to read.

JoJo Moyers delivers another heart warming novel. I have done extensive study on WWII lost and stolen art and this setting provided a wonderful story line Characters were touching and her ability to shift from one century to another was skillful. Very enjoyable.

Immediately got totally absorbed in this book and then came part two and it started to fall apart. But it picked up the pace again. A couple of spots near the end again I lost my interest but had come so far that I knew I'd finish it. Overall I enjoyed the story but not as much as the previous two books by Moyes that I have read

This one took me awhile to get into as I wasn't as interested in the "past" as I was in the "present" - probably the opposite of most people, but that's how it was for me. The last 1/3 of the book flew by though and I ended up enjoying it!

“The ability to earn a living by doing the things one loves must be one of the life’s greatest gifts”.
“Time doesn’t make a wrong right”
“I just need something to look forward to. I just want to smile without having to think about which muscles to use.”
“Sometimes just for carrying on, that’s heroic in itself.”

Liv: "You used to speak fluent French, right? Do you want to come to Paris with me?"

Mo: "Is this your way of telling me you've swung to the other side? Because while I love Paris, I'm so not up for lady bits."

"All that really matters is who you love."-Liv

"Four years ago David and I went to bed like it was any other night, brushing our teeth, reading our books, chatting about a restaurant we were going to the next day...and when I woke up the next morning he was there beside me, cold. Blue. I didn't ...I didn't feel him go. I didn't even get to say... Can you imagine knowing you slept through the person you love dying next to you?... I thought the world had actually ended."-Liv

"I only know that when I'm not with you I'm mean and mad at everything."-Paul

"Liv--you can't be straightforward about other men. No man wants to hear about how fantastic the one before was, even if he is dead. You might as well just do a whole spiel on Enormous Penises I Have Known."-Mo

Sophie, whose husband if fighting in WWI is just trying to survive the German occupation and looking forward to her artist husband's return. She has been forced to cook for the enemy forces and as a result is branded as a collaborator.
Almost a century later Liz Halston has a painting of Sophie given to her by her husband shortly before his death. The painting then becomes subject of legal action. Who actually owns the painting.

There are no age suitabilities for this title yet.