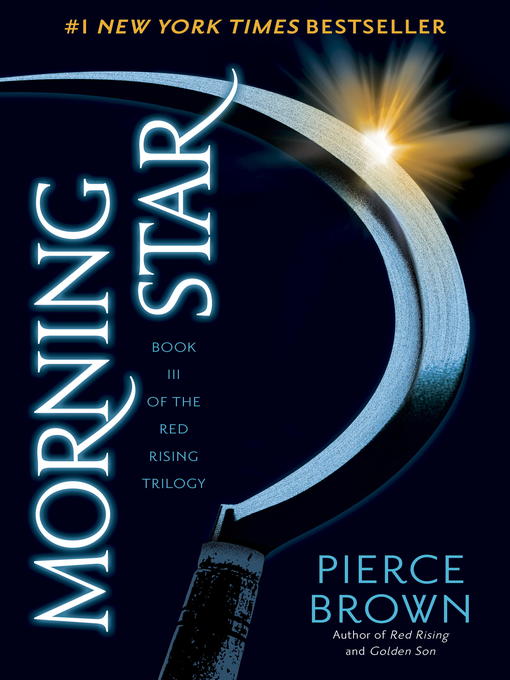 Red Rising thrilled readers and announced the presence of a talented new author. Golden Son changed the game and took the story of Darrow to the next level. Now comes the exhilarating conclusion to the Red Rising Trilogy: Morning Star.Darrow would have lived in peace, but his enemies brought him war. The Gold overlords demanded his obedience, hanged his wife, and enslaved his people. But Darrow is determined to fight back. Risking everything to transform himself and breach Gold society, Darrow has battled to survive the cutthroat rivalries that breed Society's mightiest warriors, climbed the ranks, and waited patiently to unleash the revolution that will tear the hierarchy apart from within. Finally, the time has come. But devotion to honor and hunger for vengeance run deep on both sides. Darrow and his comrades-in-arms face powerful enemies without scruple or mercy. Among them are some Darrow once considered friends. To win,...
Publisher: 2016
Series:
ISBN: 9780345539854
Characteristics: 1 online resource

Wow. This one I feel dragged a little in the middle, so it took me a little longer to finish. But all the twists and turns at the end were jaw-dropping! I did see the very last reveal coming a mile away - like pretty near from the beginning. But still was nice to see it pay off. What a cool ending to this trilogy. I'm excited to continue and get a taste of what happens now this story is done.

A powerful conclusion to the Red Rising trilogy. Full of twists and turns, non-stop action, and some truly heart-wrenching moments, Brown's finale is as strong as the first book.

I really enjoyed how the trilogy was ended. Unexpected plot twists kept the book exciting all the way through!

This book is a must read. It a bit slower paced but it wraps up the trilogy really well. After reading Iron gold I realized how well this book got everything together. This series create a world easily remembered.

i read this book to fulfil the goal read a book by someone else taking the popsugar reading challenge. it is number three in a series. it is the best one so far. this is full of twists and turns and suprise endings. i was pleasently suprised after the drugery of the first two. it almost makes me glad i read this series

Pierce Brown is incredible. Twists around every corner, a challenging message and a sliver of hope through it all.

Really, though, this book is for the hardcore sci-fi fan. The series was lauded as 'The Hunger Games all grown up,' but there is so much more to it than that. In the final book in the original trilogy, Darrow has to face difficult decisions, the ache of lost friends, and the veil of war drifting over it all. I'm in love with these characters and this world, and I'm so glad a follow-up trilogy has begun.

Strong conclusion to an excellent trilogy. I enjoyed the other two books a bit more, but that's simply because this one was very war-focused and that's not my favourite topic. I do, however, understand why that was necessary within the context of this trilogy - and "enjoyed a little less" is certainly not an indictment of the book.

I think that what I enjoyed the most about this series is that it took a hard look at some of humanity's strengths and weaknesses in a clever way that wasn't overly moralistic. The characters were well developed, and they all had plausible mixtures of positive and negative traits.

The fast-paced conclusion to the *Red Rising* trilogy sweeps the galaxy into full scale civil war. Obviously the lowborn Darrow is a huge part of this book, but I was pleased to find the story shifting to include more about Darrow's friends. Brown's vivid prose is even sharper in this book, bringing us closer to the heart-pounding action. Although I'm sad to reach the conclusion of this ambitious science fiction series, I was very satisfied with the ending!

​​The thrill ride comes to an end. I read through this book expecting to find something that would let me down. It's rare to find a trilogy where at least one entry doesn't fail to live up to the other books. This is one of those rare entries. Even the ending was satisfying, leaving just enough foreshadowing for more material. Which is great, with Brown releasing the first of a new trilogy next year.

If I were forced to find a single criticism, it would be that the three books in the series were a little brief. The trilogy could probably have been divided into two larger books, with the story splitting after the first third of the second book. If I had read them initially upon their release, it would have been a hard wait for more material. It's hard to put these books down once you start reading. But, as all three books are available, it's not a problem for new readers. I can't wait to read more.

Kyanite thinks this title is suitable for 16 years and over

ADWithrow thinks this title is suitable for 14 years and over

p_leitch thinks this title is suitable for All Ages

Frightening or Intense Scenes: Dire moments of life or death.

After being captured at the end of book two Darrow is now being held by the Jackal (who is now ArchGovernor) as a prisoner “on loan” from the Sovereign. He spent three months in interrogation then another nine months in a box in complete darkness. As he is to be moved from the Jackal’s fortress back to the Sovereign for dissection the Sons of Ares are able to break him out. Though Darrow was believed to be dead, Sevro never gave up and finally found him. He has been leading the rebellion in Darrow and Fitchner’s absence which is near falling apart.

Darrow’s family is alive as well as Dancer. They were able to also rescue Victra from the Jackal. Darrow’s integration back into the world is rocky, and his body needs much healing.

Tens of thousands of low color refugees have flooded near the Ares base. There are skirmishes all over Mar’s, and much of the Society is consumed with the Moon Rebellion. Roque leads the Sovereign’s fleets.
- http://www.bookseriesrecaps.com/how-did-morning-star-end/

"If your heart beats like a drum, and your legs a little wet, it’s because the Reaper’s come to collect a little debt."