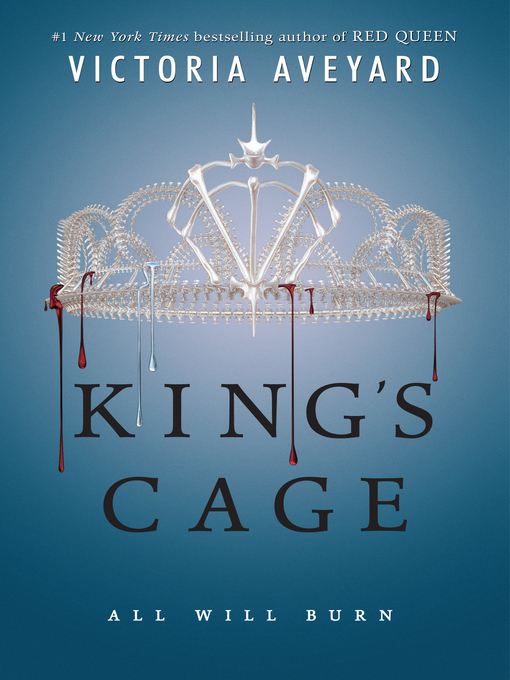 The #1 New York Times bestselling series! In this breathless third installment to Victoria Aveyard's #1 New York Times bestselling Red Queen series, rebellion is rising and allegiances will be tested on every side. Perfect for fans of George R.R. Martin's Game of Thrones series. Mare Barrow is a prisoner, powerless without her lightning, tormented by her lethal mistakes. She lives at the mercy of a boy she once loved, a boy made of lies and betrayal. Now a king, Maven Calore continues weaving his dead mother's web in an attempt to maintain control over his country-and his prisoner. As Mare bears the weight of Silent Stone in the palace, her once-ragtag band of newbloods and Reds continue organizing, training, and expanding. They prepare for war, no longer able to linger in the shadows. And Cal, the exiled prince with his own claim on Mare's heart, will stop at nothing to bring her back. When blood turns on blood, and ability on ability, there may be no one left to put out the fire-leaving Norta as Mare knows it to burn all the way down. And don't miss Broken Throne: A Red Queen Collection, featuring three brand-new novellas and other exclusive content, coming in April!
Publisher: 2017
Series:
ISBN: 9780062310712
Characteristics: 1 online resource data file, rda

Mare is now imprisoned in a cell of Silent Stone, vulnerable without her lightning. She is forced to kneel before the king of Norta, a boy who once betrayed her. He used cruel tactics to gain his title and he doesn’t deserve his position. Though Maven will not kill her, he will certainly use her to his advantage. As she attempts to gather information from the young king, the Scarlet Guard has plans of its own.

The dramatic third installment of the Red Queen series doesn’t fail to impress. It’s great for someone looking for a lot of action and drama.

I really enjoyed this series and I totally recommend. I cannot really find another book that I have read that is similar. (which is great)

This series is awesome! I really think they should make a movie on at least the first book. Like if you agree.

I’m not leaving this place unless I leave behind his corpse—or mine.

I got super excited, but Aveyard let us all down... really hard.

This statement was suppose to mean something and while she had the chance to at least hurt Maven she wouldn't... lame. If you're going to say it, do it.

While I was kinda bored through most of the political garbage (Yes, the entire back end of the book) having Maven back is wonderful!

Maven is what held this book through.... also can we talk about where the hell Cameron came from?

We learn two things about her and all of a sudden she's some super important character that we actually don't give two craps about, just saying.

All of the characters except for MAVEN's is underdeveloped. He is the only one I can truly connect with because he's the only one that we see grow, even if it is into darkness.

Aveyard while she is good at fight scenes and battle lacks tremendously as romance.... even with THAT SCENE between Cal and Mare going on I didn't really care, because she hasn't developed either of their characters it didn't hit home like it should. Instead it was more like yeah we they did it... we understand the implications....

that being said the end wasn't as devastating as I think she wanted it to be... because the characters weren't DEVELOPED!

All I want, honestly.... Is more Maven. Though he's young and vile and honestly he is the only character I connect with and simply care about. Mare does all the crap to herself. Pick a brother thats all I'm saying.... and when you do pick a brother don't beat him for trying to do the right things because you don't know what the "right" thing is either.... its all gray sweetie, all gray.

the third installment of the red queen series was amazing I couldn't put it down and I read it before bed and before I knew it the clock read 12:00 this book will keep you hooked on the action and relationships

This book(series) is the BOMB!! It’s legit sad that she is captured and everything but when you get to the end you start to LOVE the book even more! I suggest you read the whole book series and other book by Victoria Aveyard because she is Awesome!

Okay, so I'll start this review by saying that I wasn't that psyched to read this book. The series just felt like it was getting progressively worse, after Glass Sword. Right before I read this series, I was reading the Throne of Glass series, and I HATED that in the last book you have to read like 400 pages of the main character being kidnapped and tortured by Queen Maeve. So, I certainly wasn't excited for another book like that. However, Aveyard wrote this book pretty well. Also, when I opened this book up, I was terrified. Why? Here's what I saw: Chapter 1. Mare. I was like, "MULTIPLE POV'S? NOOOOOOOOOO! I'M GOING TO HAVE TO SUFFER THROUGH LIKE HALF THE BOOK FROM CAL'S PERSPECTIVE! (at the time I hated Cal. Although, actually, now that I think about it, I still do.) I was holding my breath through the first few chapters, terrified that I was going to have to read from Cal's POV. However, when I flipped through it and saw that the other POV was Cameron, I almost screamed in delight. I actually did a happy dance all around my house. Cameron was my favorite character from the last book, and I was worried that she was going to be pushed off to be a background character, like the other Newbloods. However, her power sort of encouraged her to give some AWESOME quotes, and the chapters from her perspective were some of my favorites in the whole series. I also like reading from Evangeline's POV, and learning more about her character. However, one of the main things I didn't like about the book can be perfectly summed up by this Cameron quote: "I want to snap that my priority is to get the heat working in my barracks, not find out how many times Mare used the bathroom today..." I feel like this book was filled with a lot of useless information, especially from Mare's perspective. It could have easily been 100 pages shorter, just by cutting out a lot the descriptions of Mare's time in her room.

Insane. So many things happened.
(Spoilers)

"He truly doesn't know what parts of his mind are his own and what parts were made by her." -Mare. At this part, I thought that there would be some part of Maven that would come back. That the "good" side of him would come through, but due to his mother's actions, that isn't possible.

""The rules of war are clear. Spies are to be dealt with swiftly."
"When you are sick, who do you blame?" I demand. "Your body or the disease?"
He glares down at me and I feel hollow. "You blame the cure that didn't work."" Dude. I really liked this part. It just adds to Maven's growth of maliciousness.

"Monsters are most dangerous when they're afraid." -Mare. More Maven character building. I liked that.

"Now I'm in a king's cage. But so is he. My chains are Silent Stone. His is the crown." -Mare. Daaamn, girl. This was a nice progression in the story, showing how Mare could get out of her current situation more easily than Maven's. Also, I really liked how in Glass Sword Mare was like I'm a sword made of glass and I feel myself beginning to shatter and that was a big part of Mare's character and the feel of the book. And here is similar, Mare's character was built and she's becoming more strong. And in both instances, the titles are referenced.

Ravindersidhu thinks this title is suitable for 14 years and over

foxface thinks this title is suitable for 10 years and over

acrazylife7 thinks this title is suitable for 11 years and over

black_pony_62 thinks this title is suitable for 12 years and over

Sexual Content: Some scenes with sexual fantasies and relationships between boys and girls

Coarse Language: Contains F-word and others right up there

"The two Guardsmen flanking the door to central control step back before I even finish my usual lie. Both look away, avoiding my gaze, and I feel my face burn with an ashamed flush. Newbloods scare people as much as Silvers do, if not more so. Reds with abilities are just as unpredictable, just as powerful, just as dangerous in their eyes. After we first got here and more soldiers arrived, the whispers about me and the others spread like disease. 'The old woman can change her face.' 'The twitchy one can surround you with illusions.' 'The techie girl can kill you with thought alone.' It feels terrible to be feared. And worst of all, I can't blame anyone for it." -Cameron

‘A silver king for Montfort to control, but a silver king all the same. Reds in the dirt, as always.’