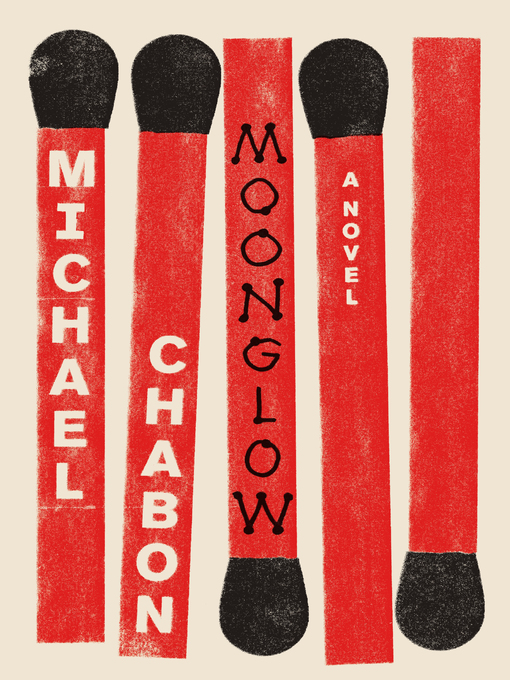 Following on the heels of his New York Times&́#x80;bestselling novel Telegraph Avenue, Pulitzer Prize&́#x80;winning author Michael Chabon delivers another literary masterpiece: a novel of truth and lies, family legends, and existential adventure&́#x80;and the forces that work to destroy us.In 1989, fresh from the publication of his first novel, The Mysteries of Pittsburgh, Michael Chabon traveled to his mother's home in Oakland, California, to visit his terminally ill grandfather. Tongue loosened by powerful painkillers, memory stirred by the imminence of death, Chabon's grandfather shared recollections and told stories the younger man had never heard before, uncovering bits and pieces of a history long buried and forgotten. That dreamlike week of revelations forms the basis of the novel Moonglow, the latest feat of legerdemain in the ongoing magic act that is the art of Michael Chabon.Moonglow unfolds as the deathbed confession, made to his grandson, of a man the narrator refers to only as "my grandfather." It is a tale of madness, of war and adventure, of sex and desire and ordinary love, of existential doubt and model rocketry, of the shining aspirations and demonic underpinnings of American technological accomplishment at mid-century and, above all, of the destructive impact&́#x80;and the creative power&́#x80;of the keeping of secrets and the telling of lies. A gripping, poignant, tragicomic, scrupulously researched and wholly imaginary transcript of a life that spanned the dark heart of the twentieth century, Moonglow is also a tour de force of speculative history in which Chabon attempts to reconstruct the mysterious origins and fate of Chabon Scientific, Co., an authentic mail-order novelty company whose ads for scale models of human skeletons, combustion engines and space rockets were once a fixture in the back pages of Esquire, Popular Mechanics and Boy's Life. Along the way Chabon devises and reveals, in bits and pieces whose hallucinatory intensity is matched only by their comic vigor and the radiant moonglow of his prose, a secret history of his own imagination.From the Jewish slums of prewar South Philadelphia to the invasion of Germany, from a Florida retirement village to the penal utopia of New York's Wallkill Prison, from the heyday of the space program to the twilight of "the American Century," Moonglow collapses an era into a single life and a lifetime into a single week. A lie that tells the truth, a work of fictional non-fiction, an autobiography wrapped in a novel disguised as a memoir, Moonglow is Chabon at his most daring, his most moving, his most Chabonesque.
Publisher: 2016
ISBN: 9781443418720
Characteristics: 1 online resource data file, rda

To those who follow my reviews, a word of caution: the following should not be taken as an unbiased assessment of the book in question. It’s just my opinion and I find myself very much at odds with most reviewers. I may be judging the book unfairly, since the writing suffers in comparison with that of A. S. Bayatt, whose effortless, flowing prose I happened to be reading at the same time.
I understand what Chabon was attempting to do: capture an old man’s disjointed, fanciful, meandering recollections of his life. Images slide past; events, encounters, adventures. The narrator may not always be reliable and certainly he cannot be objective or dispassionate. Time frames are blurred, events that may have taken place decades apart slither on top of each other. Successive generations are not always distinguished from each other, personalities infect one another. But while reading, I was continually reminded of my aged Uncle Kalman, who was famous for telling long, disjointed, rambling stories of his rather colorful life. Often, he would begin a sentence recounting a personal experience that had taken place 20 years ago but before the sentence came to an end he would be talking about an event 30 years earlier, involving someone else entirely. His oration was somewhat entertaining but in no way could it have been made into a novel.
Chabon is a skilled writer and there are many flashes of brilliance in “Moonglow”. His nameless grandfather led a quite eventful life, with many unexpected twists; boring he was not. But a meandering collection of flashes of brilliance is just that: a series of disconnected vignettes. As a novel, it simply didn’t work for me. Time and again, I became annoyed and impatient, leafing back to figure out how he had got to where he was and seeking some clue as to where the story had wandered away to.
As for character development, his grandmother (traumatized and suffering severe mental illness) was the most appealing; all the others I could do without. Place, time and atmosphere? All over the map. Plot? Negligible. The only part that hung together (even though it was partly told in flashbacks) was the grandfather’s prison experiences.
So, there it is. I don’t expect others to agree with me.

I loved this book. Chabon is such an engaging, quirky and wonderful writer. How well he draws his characters. These fictional people exist; I feel I've met Uncle Ray. Maybe it's because I grew up in an enigmatic and chaotic family that was sometimes intellectual, sometimes artistic, sometimes working class (sometimes wealthier and sometimes poorer), sometimes ordinary, sometimes extraordinary, a family with lots of strong characters like those Chabon writes about, and moved around in a lot of the US cities and their suburbs that Chabon writes about, amidst a similar New York/Baltimore/Pittsburghian gentile/Jewish milieu of this era, but I found these fictional characters very relatable. I loved the meandering. That is what life is like -- it gives a fuller picture not to distill it down. I loved the mix of audacity and the mundane here. Chabon, for me, is very much worth spending time with.

Chabon turns memories from his grandfather into a quasi-biographical, rambling narrative of post-World War II life in America. The book has its high points--the treatment of Chabon's grandmother's mental illness and eventual hospitalization, the fascination with rockets and excitement of the Apollo missions, and the anger that America's advances in aerospace came with the help of a Nazi scientist--but Moonglow fails to generate any consistent rhythm or coherence. It's an interesting experiment in combining memory and fiction, and doesn't gel as a novel.

This is a novel written as a memoir about “Michael Chabon” memorializing his “grandfather.” In the last ten days of his life, his stoic grandfather unloads stories about his time in World War II, a stint in prison, how he met his wife, the “grandmother” of the novel, and the trauma of the family dealing with her mental illness. She is institutionalized for a couple of years in the early 1950s and a profound secret of hers is “buried” there only to be unearthed in the journal of her psychologist many years later by the grandson, the fictional Mike Chabon.

The stories of his different family members are beautifully told, as only the real Michael Chabon can write, deeply affecting even. But the use of his family name(s) for the narrator and certain other family members is a very unusual choice, one that ultimately left me scratching my head. While reading the book, I assumed Michael Chabon was writing about his real family and filtering their stories through his writerly hand, adding literary flourishes as he saw fit. He never gives the name of his grandfather or grandmother, while he uses his own name (he’s called Mike) as well as his uncle, paternal grandfather, and the like. But in an article in the back of the book reprinted from BuzzFeed, Chabon cops to the fact that the novel is completely fictional. He tells the reporter, “In a weird way, it’s a memoir of not my life, but my imaginative life…” Again, this led to more head scratching. Why use his own name? Without this article in the back of the book, a reader would assume, as I did, that there was some truth in this book. If there is no truth, then why not give all the characters their own unique, fictional names?

As a writer, this choice did lead to many questions. I did ponder things like: what constitutes a novel? What constitutes a memoir? Where does fact and fiction intersect if you’re looking for truth? What if truth doesn’t matter? And these are fun things for a writer to consider and definitely gets in “nerd alert” territory. But if there are more questions than answers, then does this hobble the book itself? Would I have been more satisfied if Chabon didn’t use his family name at all? Most definitely.

Another curious choice is some very explicit details of the sex life between the grandfather and grandmother, details so graphic that I highly doubt any grandson would recount to anyone in this way. Although it’s only a few paragraphs in the book, I cannot for the life of me figure out why “Chabon” would give these lurid details about his “grandparents” having sex. Very strange literary choice.

Ultimately, this isn’t my favorite Chabon novel. I did enjoy the stories of the grandfather in World War II and his time in prison. They’re beautifully told. But mostly, it just made me realize how much I enjoyed his other novels more than this one. I’d give this novel three and a half stars.

Michael Chabon is a colorful writer using interesting metaphors, catchy phrases and keen story telling, but I found Moonglow needed a bit of editing. Too many extraneous limbs branched out from the main trunk of the story; interesting, but more appropriate short story material. The most compelling part of Moonglow describes the character’s WWII experiences trying to track down the V-2 rocket genius Wernher von Braun.

I guess I prefer tight writing and story telling without repetition, rambling asides and editable addendum. These days do authors get paid by the number of words? Or, are publishers’ budgets too shallow to afford copy editors? Just wondering...!

Fascinating book. Nice to see a Jewish point of view, especially about the "hero" Von Braun.

Could not get into this book Skipped it.!

What great characters and amazing story. This fictional nonfiction is one of my favorite recent reads.

Based extremely loosely on stories Chabon's grandfather told him on his deathbed, I expected this to be a sad, sad book. It was not. Rather, it was a celebration of the many absolute characters in Chabon's family, and their extremely strange adventures through WWII and into Chabon's childhood. Moonglow is a strong offering fans of Chabon will enjoy.

Mike Chabon writes a seeming memoir of his grandfather, but as the book jacket says what we have is ‘a lie that tells the truth, a work of fictional nonfiction, an autobiography wrapped in a novel disguised as a memoir.’ What a story. What a grandfather and grandmother.

Be sure to read the acknowledgements! Those of us coming of age in post-WW II America will find many reminders of those years when the race to land men on the moon took the nation’s attentions and filled its dreams. Highly recommended.

kelseymacc thinks this title is suitable for 18 years and over

There are no quotes for this title yet.