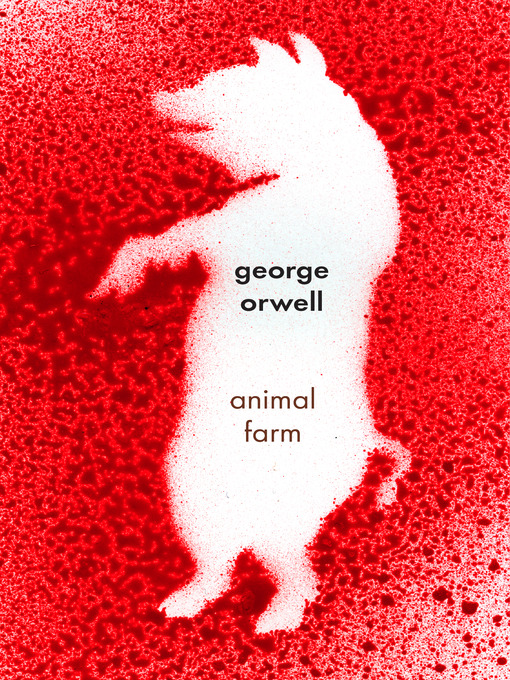 George Orwell's famous satire of the Soviet Union, in which "all animals are equal but some animals are more equal than others."
Publisher: 2009
ISBN: 9780547370224
Characteristics: 1 online resource data file, rda

Animal Farm by George Orwell is an interesting novel for teens to read. The main part that makes this book interesting is the animals and the choices that they make. The pigs represented the leaders of the “communist” society, while the horses were the workers and the sheep were the peasants. The main character of this book, a pig named Napoleon, takes advantage of the power that was given to him, and uses it to become a tyrant.

As in this book, Napoleon pushed his limits as far as the humans before him did, and eventually became no different than a human. Also, the animals didn’t even realize this. They have interesting reactions to what Napoleon does, but they never actually doubt him. The “communist” government took power over the people without them even realizing it! Due to the interesting plot line and the characters, I would recommend this book to any teen and adults who are interested in seeing how one person can take control of everything if people are not careful.

An important reminder for all of us that "power tends to corrupt, and absolute power corrupts absolutely." (Lord Acton, 1887).

Animal Farm is also one of my favorite classic novels. It has made me feel such anger that I never thought was possible (I don't think I have ever thrown a book at a window before). Animal Farm wonderfully illustrates the injustices of a communist/socialist society through a satire with animals. Napoleon's tyrannical cleverness and the rest of the animals' unquestioning acceptance depicts the dangers of government control. However, Animal Farm is written in such an amazing way that it is not only light-hearted but also humorous and entertaining. I love everything about this book: from its feelings, to its characters, to its writing, and most importantly, its lesson.

Animal Farm by George Orwell is one of my favorite books. Orwell perfectly uses satire. The book actually teaches us a lot regarding themes of oppression and freedom. Animal Farm really made me think and reflect on our own government and society in general. The book is powerful and thought-provoking. It’s especially intriguing to read since the book is centered around farm animals with their own personalities to them. While this book did make me annoyed on several occasions, it really is worth reading, especially because it’s much deeper than just a fictional book about animals living on a farm. Overall this book is just wonderfully told and I recommend reading it.

Animal Farm by George Orwell is a political satire inspired by the Russian Revolution and focuses on important topics like dictatorship and communism. We hear the story from the animals’ perspective who live on a farm where they have taken control after overthrowing their human “owners.” We tend to see the change of power from humans to the animals and then see how power changes hands from one person and animal to another. The animals take control of the farm, and two of the pigs, Snowball and Napoleon, help the farm animals in different ways through their debates and new ideas. Then, Snowball is pushed out of the farm… Who did it, and what will happen next? Read this fascinating and captivating story to find out what happens to the farm and its animals after that. I recommend this book for both tweens and teens.

So accurate though. I would have given it a higher rating but for how depressed it made me!

This book was interesting. I disliked Napoleon, because of how corrupt he was and how unequal he made the society. Some of the characters, including Napoleon, were annoying and unfair. I liked Orwell’s usage of irony in the book. He used it to depict the corrupt ways of humans, by showing it through animals. The irony reveals his commentary on how humans would be able to survive in the society that the animals tried to create at first. I would give this book 4 stars because of that.

Animal Farm by George Orwell is a shockingly realistic and immersive allegory for human government. The book follows a farm of animals that have liberated themselves from their human overlord and seek to become a prosperous society. They have plans, beliefs, and ambitions that they follow, but something changes. Before long, the original vision of the animals is lost and things begin to feel corrupt. The animals begin to encounter problems and personalities that mirror those of humans.

The book, although short, features a realistic story that is sure to leave readers thinking about its depressing theme. The book tackles idealism, human nature, and the corruption that comes with power. My favorite parts of the book are when ideas and concepts are shown that are direct parallels to a human concept, such as “All animals are equal but some animals are more equal than others.” I recommend this book to anyone interested in learning about human nature and the flaws of society. Despite having animals as the main characters, it is shocking how human they can be.

This book is like an Aesop's Fable for adults. The notions here of governmental control are applicable to any political/economic system. I read this book as a student when I was in 9th grade.

Animal Farm by George Orwell is a satirical representation about the rise of Bolshevism in Russia in the early 20th century. Many characters/animals in the novel provide equivalents between real-life figures, representing their ideologies and motives. Orwell sought to simultaneously attack totalitarian and more restrictive forms of capitalism, by comparing them to each other; he points out their similar forms of oppression over the lower classes. The rise of Russian communist thought, with an originally positive message for all, is encapsulated by the character of Old Major, while the twisted continuation of that viewpoint is shown in Napoleon’s government and the transition from ideals of a communist utopia to a totalitarian communist government.
Drawing large parallels between the occurrences in Russia in the early 20th century and the events in Animal Farm, Orwell hides his intent to criticize certain forms of governments, while revealing satirical commentary about those forms of government. Orwell thus displays his political ideology through these forms of criticism. The controversy of this novel around the world represents a time of erratic panic and fervor, with events like the Red Scare in the United States during the mid-20th century.

red_hawk_1649 thinks this title is suitable for 11 years and over

cwcyrus1 thinks this title is suitable for 12 years and over

LoganEva thinks this title is suitable for 11 years and over

danielgarcia2002 thinks this title is suitable for 13 years and over

alexqise thinks this title is suitable for 13 years and over

kyang_91 thinks this title is suitable for 11 years and over

AnushaU thinks this title is suitable for 12 years and over

karyn8787 thinks this title is suitable for 10 years and over

IshaanGupta30 thinks this title is suitable for All Ages

Anirudh_Kannan thinks this title is suitable for 12 years and over

"Man is the only real enemy we have. Remove Man from the scene, and the root cause of hunger and overwork is abolished for ever."

"Donkeys live a long time. None of you has ever seen a dead donkey." ~ Benjamin

"Windmill or no windmill, life would go on as it had always gone on - that is badly."

"I have no wish to take life, not even human life." -Boxer

"I will work harder" -Boxer

My dad told me to read Animal Farm a long time ago and I finally decided to read it this Summer. I though the book was just going to be about animals on a farm but it was really different. I wish the book was longer because I loved it so much and it is definitely on my list of favourites books now. I would highly recommend this book to anyone.

Animal Farm is about animals...animals who learn and over throw the humans that run the farm and keep them away. However, the learned animals have difficulties and also learn being human isn't necessarily a bad thing. What starts out as equality and common ground and rules to live by changes over the course of time into something no one could foresee.

Animals at a farm join together to overthrow what they feel is evil...Man. They successfully lead a rebellion against Man and take control of the farm. They are leading a happy life without Man at the farm. But, after kicking out Snowball, the pigs are corrupting what the animals wrote out as the Seven Commandments...Is it possible that animals can be evil too?
A prime example of how rebellions can often go wrong, and George Orwell is adding on to what happened with the Russian Revolution.

When I read through this book, I REALLY thought that Animal Farm was a tale about animals. But afterwards, I searched up this book and read that it was actually about Communism. The book begins with the animals rebelling to Men. They won the rebellion, kicked Men out, and started taking over their own farm. Later on, Snowball, a pig, organized the farm and declaimed himself as leader. The animals were happy they finally can work for just themselves. But meanwhile, Napoleon, another pig, started stirring things up into tyranny. He trained puppies that nearly killed Snowball, and he became the dictator. Every animal had to agree with Napoleon, or else they would be killed. At last, Animal Farm became a dictatorship of pigs, and that ends the story. I would say this book is a tough read and recommend this book to deeper readers. The author's style of language was often hilarious, but this book as a whole fetches greater interpretation of the message conveyed. One last note, this book isn't really about animals...

Farmyard animals band together to overthrow the evil farmer.