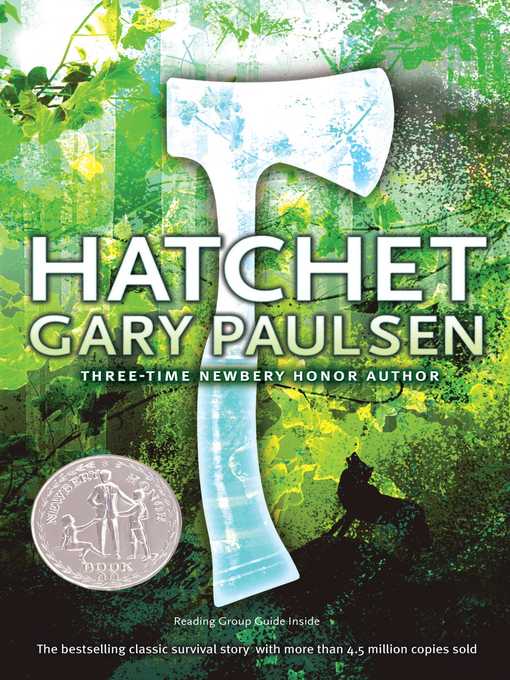 Celebrate the thirtieth anniversary of the Newbery Honor winning survival novel Hatchet with a pocket-sized edition perfect for travelers to take along on their own adventures. This special anniversary edition includes a new introduction and commentary by author Gary Paulsen, pen-and-ink illustrations by Drew Willis, and a water resistant cover. Hatchet has also been nominated as one of America's best-loved novels by PBS's The Great American Read. Thirteen-year-old Brian Robeson, haunted by his secret knowledge of his mother's infidelity, is traveling by single-engine plane to visit his father for the first time since the divorce. When the plane crashes, killing the pilot, the sole survivor is Brian. He is alone in the Canadian wilderness with nothing but his clothing, a tattered windbreaker, and the hatchet his mother had given him as a present. At first consumed by despair and self-pity, Brian slowly learns survival skills-how to make a shelter for himself, how to hunt and fish and forage for food, how to make a fire-and even finds the courage to start over from scratch when a tornado ravages his campsite. When Brian is finally rescued after fifty-four days in the wild, he emerges from his ordeal with new patience and maturity, and a greater understanding of himself and his parents.
Publisher: 2009
Series:
ISBN: 9781442403321
Characteristics: 1 online resource data file, rda

My daughter very much enjoyed Hatchet. "Brian was a very interesting young man who I loved reading about. I love survival books like this, and I hope to read more." That's what she said to me.

Fondly remembered this story from my youth, but relistening with kids was less satisfying... and more scary!!

Brian, a 13 year old boy who's parents are divorced, is visiting his dad while suddenly the pilot had a heart attack, and the plane crashed. Brian is forced to survive in the wild with only a hatchet on his belt. Will he survive? Read to find out.

Hatchet is about a boy named Brian who gets stranded in the middle of nowhere after an unsuccessful plane ride. He has to survive off his own instincts and find a way to get help. All he has is a hatchet that was given to him by his mother. Brian has to protect himself from the wilderness, and sustain himself with unknown foods. He endures harsh events like tornadoes and a scary experience with a moose. Desperate, Brian must find a creative way to get off the island. This book was a true page turner, because every time I thought Brian would not survive or give up, he pushed on. I sincerely recommend this book to readers who love adventure and survival books!

This was a great book!

One of my favorites and I wish Peter Coyote read many more books. Despite this being about a boy of 13, it's a very engaging tale with some wisdom for any age.

The Hatchet is a story about a 13-year old boy,Brian. After his parents divorce he decides to fly to visit his dad. As he is traveling in a single engine airplane, the pilot has a heart attack,leaving Brian in the canadian wilderness with nothing but a hatchet. Here he is forced to test his physical and mental strength to survive. On top of that, he has to bear the horrible secret that has been tearing him apart. One thing that I really like about this book is that it shows how he develops from being a normal boy who takes many things for granted to an independent, hardworking individual. I would recommend anyone to read this book because it shows multiple examples of creativity and ingenuity
to survive.

The book “The Hatchet”, is about a boy named Brian, his parents are divorced and he goes on a flight to visit his father. However the plane crashes where he is in the middle of nowhere. He has to survive in the wilderness in order to be able to found soon. Brian uses mostly his hatchet to try to survive. But he has to be strong and courageous in order to survive, if he loses hope, then that means death for him. In the end it’s up to him to save himself or not save himself. I like this book a lot because I think it displays how to not take what you have everyday for granted, and it shows how you should be grateful for everything you have. I recommend this for teenagers, because I think teenagers tend to take what they have for granted because they get caught up in other things, and it also teaches them survival skills which I think are important.

Thirteen-year-old, Brian Robeson crashes in the middle of nowhere, with nothing but the hatchet his mother gifted & the clothes on his back. His parents have recently gone through a divorce, and what was meant to be Brian's visit to his father, has suddenly arose into disaster after the pilot undergoes an unexpected heart attack.
When all hope seems lost, Brian is forced to survive under the harsh wilderness on his own. While reading this, you begin to understand the limits that he's willing to take in order for his survival.
Overall, this book offers a new experience. Personally, I found it quite entertaining, if you're into survival, this one's for you.

Hatchet, is a fictional story of survival for 13 year old Brian Robeson. Shortly after his parents’ divorce, Brian was the sole passenger on a single engine plane flying to visit his father in Canada. The pilot suffered a heart attack and died. Brian crash landed into a lake surrounded by wilderness. He survived, but this city boy had to fend for himself in the unfamiliar backwoods. With his parents’ divorce heavy on his mind, he had to find ways to survive in his new “home”. He survived the wilderness for 54 days before being rescued. Through it all, Brian grew mentally and physically, and became independent.

I enjoyed the fast pace at the beginning of this book. The pace made the story fun as I went through the pages learning about Brian’s life and misfortunes. This book showed that in order to survive a tough situation you must be mentally and physically fit. You may make beginner’s mistakes at first, but learning from these mistakes will greatly improve your situation. That was a huge life’s lesson to take away. Somewhere by the middle of the book, the story got repetitive and boring. The story repeated itself chapter after chapter talking about Brian’s daily life of endlessly hunting, sheltering, sleeping, hunting, sheltering, sleeping. The ending of the book was abrupt and a little bit of a letdown. I was actually expecting his rescue to be a bit more dramatic, like his parents hopping off the plane to a teary reunion. Nope, that did not happen.

orange_snake_469 thinks this title is suitable for 12 years and over

LoganEva thinks this title is suitable for 11 years and over

SapphiraBucher thinks this title is suitable for 11 years and over

Painuly999 thinks this title is suitable for 10 years and over

Sean_Exon thinks this title is suitable for 10 years and over

kyang_91 thinks this title is suitable for 6 years and over

Yummydoo thinks this title is suitable for 10 years and over

13-year-old Brian Robeson struggles to survive in the North Canadian wilderness after his plane crashes.

In this book, a tween named Brian is on a plane flight to visit his dad. In the plane, the pilot gets a heart attack and Brian is forced to try and fly the plane as long as he can. When he crashes, he gets injured and slowly recovers in the wilderness with only a hatchet. Along the way, he makes new tools that help him in many ways during his treacherous days in the forest. He eventually gets rescued by a man that came looking for him.

After a plane crash in the Canadian wilderness, thirteen year old, Brain must learn to survive the wilderness with the use of his only tool a hatchet.

BRIAN ROBERSONS GET LOST AND HAS NO WAY TO OUT. THEN HE TRIES HIS BEST AND FINALLY SURVIVES.

Brian Robeson is going to his dad's home in Canada but the pilot of the small bush plane he is riding has a heart attack and dies. Brian has to land the plane and survive in the wilderness.

The book that I Have just finished is called, “The Hatchet” by Gary Paulsen a realistic-fiction book. In the book the protagonist is, Brian Robeson a fourteen year old teenager. The setting which most took place was the forest of Northern Canada. Brian is trying to go to Canada by an airplane to see his father during the summer; however, the pilot had a heart attack and died the plane; however, went out of control and Brian and the pilot fell down into a lake in the Northern Canada forest. The protagonist is the obstacles is the things in the forest that is trying to get him dead, for an example: the mosquitoes are keep on biting him and lead poison into his body which could lead him to death. There is a second part to the book which is called, “The River” also by Gary Paulsen and a realistic-fiction book.

Brian Roberson was going to his father's for the summer.But his pilot had a heart attack and the plane crashed.Can Brian survie in the wildness

When the going gets tough, the tough get going.

If he
had
fail
he
shall
try
again
-Robert U

"Food was everything," Thought Brian.

Loading...
PMPL owns a similar edition of this title.